A Heart for Home

Alumnus Fueled by His Passion for Education and Giving Back

That was the distance the then 16-year-old traveled from his home country of Cameroon to play basketball at Besant Hill, a boarding school in Ojai, California.

Tchoyi (’16, history) had never lived away from his parents or flown on an airplane. In his community, education was valued but also a luxury: Some children had to forgo school because their parents could not afford to pay.

“I was more excited than anxious about anything,” he says about coming to the United States in 2007. “I was excited knowing that I had this huge opportunity to get a free education and explore the world.”

After settling in California, Tchoyi returned to Cameroon only once in high school and once in college. Even though he was worlds away from his loved ones, culture and community, he never really left any of it behind. He was committed to making his family proud and finding a way to give back to his home country.

Although he was recruited to play basketball, it wasn’t his first love in terms of sports. Tchoyi initially played soccer, but as he grew taller than many of his peers, his coach suggested he switch to basketball, a less popular sport in his country.

The neighboring military base had both a soccer field and a basketball court where Tchoyi, who eventually grew to 6-foot-5, learned the game that would bring him to the United States.

It wasn’t long before he was scouted by Besant Hill. A friend from Cameroon who played for the private school’s basketball team helped to recruit him, he says.

“My parents never wanted me to play any sports. They have never seen me play basketball,” Tchoyi says. “They were fully invested in my education and worried basketball would take me away from the classroom. I wanted to perform well in the classroom so they could see I would do both.”

The youngest child of seven also had his own personal cheering squad.

“My siblings inspired me to play,” he says.

‘Finish what you start’

Tchoyi says his mother taught him to be self-reliant and independent — putting him to work around the house cleaning, washing dishes, and trekking four miles roundtrip every other day to get clean water. Those traits would serve him well so far from home.

While at Besant Hill, Tchoyi was recruited to come to Cal Poly Pomona after coaches saw video of his games.

“I didn’t know where Cal Poly Pomona was, but I am so grateful that I ended up going there. It opened so many doors for me. It was the right place for me.” 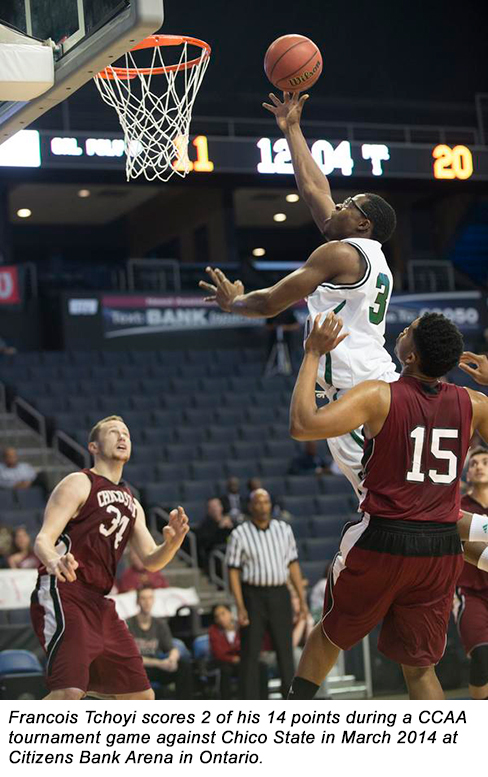 “Coach K said, ‘You don’t stop running until you’re done,’” Tchoyi says. “Finish what you start. When I start something, I have to do my best to finish it.”

Kamansky recalls that Tchoyi was redshirted his first year, playing a total of five seasons on the team. He described Tchoyi as the consummate teammate.

“He was the typical-do-anything-for-the-team type of guy,” Kamansky says. “He never complained. He’ll play five minutes. He’ll play 30 minutes. He cared about the team more than anything else. He was just a pleasure to coach.”

Kamansky says it was easy to root for Tchoyi as a player, as a student and as a person.

“He is definitely a young man who had to deal with adversity, and he came through,” Kamansky says. “He never saw his family for several years. He struggled with the language. He struggled in school. He was a guy who would stay up until 2 in the morning to get work done.”

At Cal Poly Pomona, Tchoyi started out studying international business but switched his major to history after the first year.

“It’s like a scavenger hunt for me,” he says of his love of history. “When I get new information, I get excited about it and want to share it with people.”

One of his mentors was History Professor John Lloyd.

“He’s such a wonderful student to have in class,” Lloyd says. “He always added such great insights during our discussions. He is so polite. Just a delightful student.”

Lloyd says he and other professors gave Tchoyi a little extra support because he was doing everything on his own. When Tchoyi, who is putting the finishing touches on his teaching credential through an independent-study program, needed help studying for the required California Subject Examinations for Teachers (CSET) test, Lloyd stepped in to assist.

Tchoyi was struggling with the written portion of the CSET, as English is his third language, so he would write practice essays and Lloyd would provide feedback.

“He is very diligent and persistent,” Lloyd says. “It helped him pass the test. He did all of the work. I just gave him a little helping hand.”

A heart for home

Tchoyi returned to Besant Hill in 2018 after receiving his history degree in 2016,

He teaches U.S. and world history at Besant Hill, something that Lloyd says gives him a sense of pride. 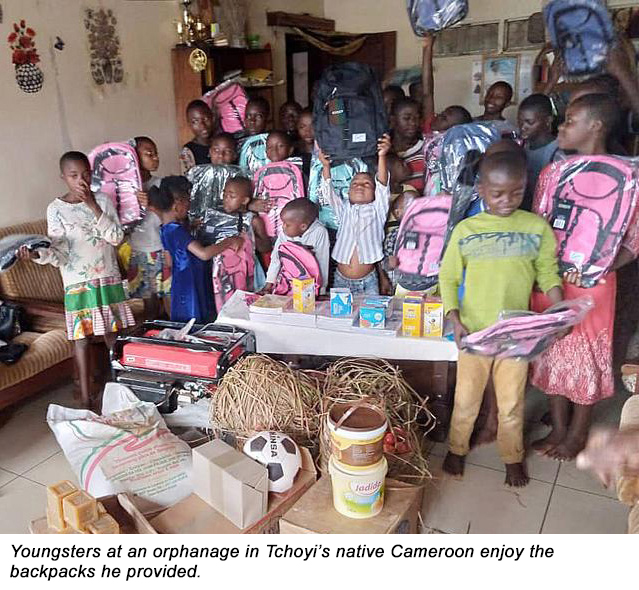 “I just like sharing knowledge,” Tchoyi says. “What I enjoy the most about teaching is that you always end up learning more. As I am teaching, I am learning. I am also learning from the students. They’ve taught me to be more organized.”

Tchoyi also shares his story with his students to impress upon them the power of education to transform lives and emphasize the importance of giving back.

Last summer, he adopted an orphanage in Cameroon, fundraising to provide backpacks, school supplies and food to 55 children. He was supposed to go home in June to visit the orphanage but could not travel due to the COVID-19 pandemic, so his siblings made the presentation for him.

Tchoyi hopes to make his support of the orphanage an annual affair.

Leveling Up
The Big Pivot
Need to Know
The Work Around

A Heart for Home

Alumnus Fueled by His Passion for Education and Giving Back