Tucked away on a former avocado ranch in the hills of Escondido is a converted barn where students — many of them veterans — participate in an intensive program that gives them the tools to become modern-day farmers.

“Those kinds of things are essential for a small farm to be able to succeed.”says Steven Nuñez

“Those kinds of things are essential for a small farm to be able to succeed,” says Steven Nuñez, a resident of Fort Worth, Texas, who served in the Marine Corps from 2001 to 2011 and finished the program in 2018.

The program is open to anyone, but it has drawn many veterans and current military members preparing to return to civilian life, particularly members of the Marine Corps and those with ties to military installations in San Diego County.

From Avocados to Hydroponic Farming

The Sustainable Agriculture Training program was developed by Colin Archipley and his wife, Karen Archipley, who purchased the Escondido avocado ranch in 2006. Originally, the farming operation was just a hobby, Colin says.

Karen moved onto the property while Colin was deployed in Iraq with the Marines.

“My first thing was to turn the water on for the trees,” she says.

The couple had been told their water bill would be about $50 a month but were shocked to see their first bill for $850.

“I always say that’s the moment we became a sustainable farm,” Karen says.

While in Iraq, Colin researched the business side of small farms, water management and other aspects of agriculture. Hydroponics was a farming method that seemed to have potential.

Upon Colin’s return home, he and Karen met with a hydroponics supplier in the area and the couple established a farming operation called Archi’s Acres.

“I always say that’s the moment we became a sustainable farm.”Karen says. 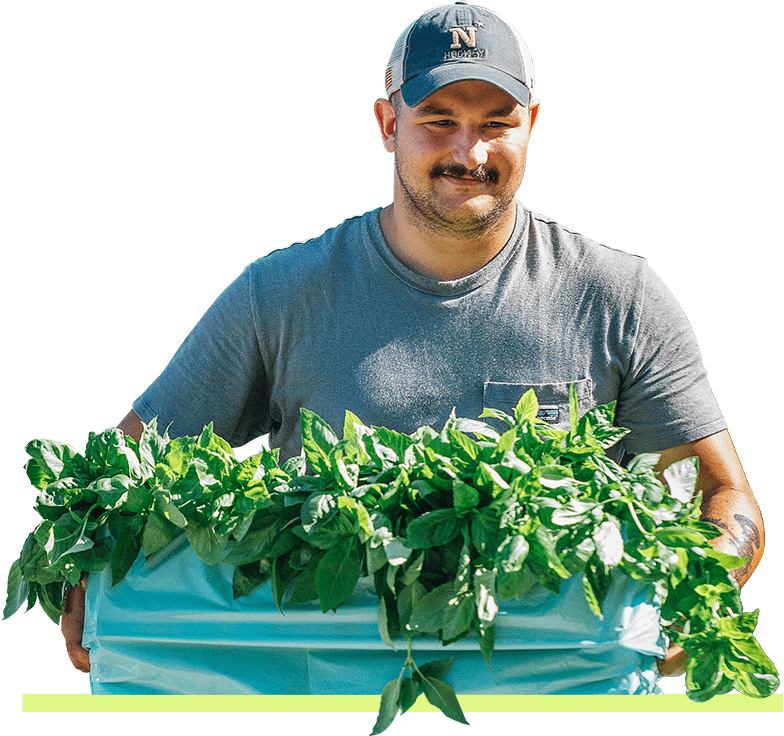 When they opened the six-acre farm, the Archipleys worked with the U.S. Department of Veterans Affairs to establish a work therapy program. The hydroponic farm grows basil on five of its six acres, as well as other herbs and some produce.

“We came up with this training program as a way Colin could stay connected to other veterans here stateside.”Karen says.

“We came up with this training program as a way Colin could stay connected to other veterans here stateside,” Karen says. “Out of that selfish thought we get to be a part of people’s lives in the coolest way.”

When the Great Recession hit, the couple began to look for ways to provide more employment opportunities for veterans. They came up with the idea to establish an educational program to teach veterans about agriculture and business.

But in order to grow the program, they needed to help students access financial aid to pay for the training.

The Future of
Agriculture

A handful of Cal Poly Pomona students have traveled to Escondido to take part in the SAT program, including Sommarani Chan (’17, food and nutrition), who is currently a master’s student studying nutrition and food science.

Chan, a veteran who served in Afghanistan and Panama, says the farm’s sustainable methods piqued her interest.

“Much of organic produce in California is being grown using sustainable methods,” she says. “I wanted to explore that.”

By the end of the course, Chan had tried her hand at sustainable farming and created a business plan for an edible mushroom business that can be be executed in limited space. The plan is on hold for now, but it’s something that she may put into action after she becomes professionally established.

Howard Evans, whose College of the Extended University administers the program, believes SAT has potential to expand.

“It definitely fits within the urban agriculture approach,” he says. “This is a program that could benefit many people and lead to more business opportunities.”

Replicating the SAT program would make it possible for more people to develop the farming and business skills without having to travel to Escondido.

Karen Archipley values the partnership with Cal Poly Pomona and hopes to expand it to other colleges and universities around the country, giving more veterans the opportunity to work in agriculture.

“Our partnership with Cal Poly Pomona means the world to us,” Karen says. “We feel like we found a home.”

“Our partnership with Cal Poly Pomona
means the world to us. We feel like we found a home.”
– Karen Archipley

The couple reached out to their longtime friend, Professor Valerie Mellano, who chairs the plant science department at Cal Poly Pomona.

“They needed to be allied with a four-year agricultural university, and a partnership was a natural alliance for us,” says Mellano, who had also guest -lectured at Archi’s Acres.

The Archipleys and Cal Poly Pomona began working together in 2013 to improve and formalize the curriculum so that participants — both veterans and civilians — could receive 12 semester units of class credit that can count toward a college degree.

Thanks to the partnership, SAT students are eligible to apply for federal financial aid, such as GI Bill benefits. This type of support, along with the intensive pace of the program, is especially valuable for student veterans, who may face challenges with time, finances, family obligations and sometimes the transition to civilian life. These constraints make enrolling in a traditional university program difficult, according to Howard Evans, dean of Cal Poly Pomona’s College of the Extended University.

“SAT provides a direct path to a meaningful career in a relatively short six-week program. It results in 12 semester units that students could use in the future should they choose to pursue a full degree,” Evans says. “We are enamored with the program because of its life-changing ability.”

Some SAT participants have entered into agreements with representatives of major grocery chains, Evans says.

“There is just something about producing crops and food that seems to be a really good match with people who have formerly been in the military,” she says.

In addition, “the veterans come into the program and they are a little more mature, they know how to work really hard. They tend to be more organized. They tend to be very driven in regard to what they want to do.”

The American Horticulture Therapy Association has found that programs that use farming as part of rehabilitation, vocational training and career redirection can help veterans transition to civilian life.

Over the years, Archi’s Acres has been recognized for its work, and in 2013, the Organic Trade Association gave the Archipleys its Rising Star Award. The following year, the program was honored as part of the Champions of Change: Veteran Entrepreneurs program by the Obama administration.