Not everyone gets to combine what they love to do with what they feel called to do, but Randy Choi does just that every day.

Choi (’95, marketing) co-founded Thompson Tee with his business partner Billy Thompson in 2011, and while the road from startup to a multimillion-dollar enterprise hasn’t been easy, the pair has found success thanks to their grit, hard work and an appearance on a little entrepreneurial competition show called “Shark Tank.”

The pair had applied to be on the TV program years ago but were not selected. After they created a crowdsourcing video to help push their T-shirts and also appeared on a show called “The Doctors,” the producers from “Shark Tank” reached out.

“We somehow skipped the line,” he says. “We didn’t have to do the audition process. We got very lucky.”

In the eight-month lag between when they shot the episode and when it aired in May 2017, Choi and Thompson had doubled the size of the business. However, at a screening party to watch their “Shark Tank” debut with family and friends, the duo realized that pitching their T-shirt on the show offered a boost that only television can. 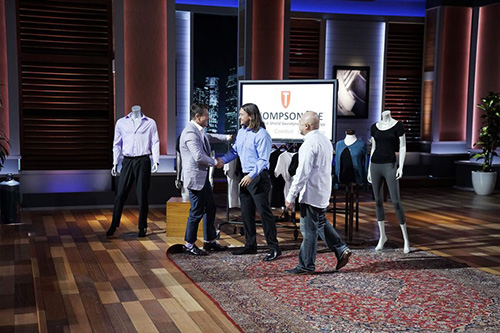 The T-shirts, which come in cotton or rayon bamboo in shades of white, black, grey and beige, are not just about fashion. They’re also about function.

The anti-sweat shirts are designed to provide confidence for day-to-day stressful situations and are effective enough to help those who suffer from hyperhidrosis, a medical condition that causes heavy perspiration.

How does it work? An ultra-thin patented layering system sewn into the armpit area allows vapor to pass through for cooling but keeps sweat at bay so that there are no visible stains.

Nearly 5 percent of the global population has hyperhidrosis, with up to 35 percent grappling with situational stress sweat, according to statistics from the International Hyperhidrosis Society.

Both Choi and Thompson are included in the 5 percent, but the longtime friends were not aware that the other had hyperhidrosis until they decided to go into business together.

Choi’s wife, Marife (’95, industrial engineering) grew up with Thompson’s wife, and the two men have been friends for about 15 years. In 2011, Choi was considering purchasing a fast food franchise when the two men discussed teaming up on Thompson’s idea for the shirts. 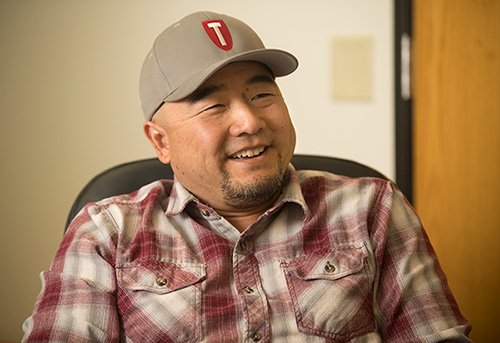 Thompson was on his way to American Apparel to discuss manufacturing the T-shirt when he stopped by Choi’s house. Family and friends, aware that Choi had previously owned an apparel company, suggested Thompson reach out to him. That is when Thompson told Choi about his hyperhidrosis and found out that Choi had the same condition, only the cranial variety, with sweating coming from the head.

They first opened shop in Anaheim but moved the company to Las Vegas in 2018. While Thompson handles sales and customer service, Choi focuses on operations and supply chain.

“It’s perfect,” Thompson says. “Our skill sets complement well and overlap to keep it cohesive. He’s an entrepreneur. Soon after Cal Poly Pomona, he went into business for himself, which is something I didn’t have.”

Their recognition has grown with their business. In 2018, Thompson Tee received the Outstanding Diverse Business Award from SCORE, a Herndon, Virginia-based national network of volunteer, expert business mentors. Thompson Tee was lauded for its steady growth, diverse staff and international customer base, with their T-shirts now sold in more than 135 countries. The company also was recently highlighted in online retail giant Amazon’s Seller Spotlight.

Choi was about 13 when he had his first episode of hyperhidrosis. He was hanging out with friends, chatting up some girls, when he felt sweat pooling around his head.

While a student at Cal Poly Pomona, the Villa Park native kept his hair long and gelled it up so others would think he was purposely going for the wet look. He also kept extra shirts to change into in his backpack, he says.

While driving on the 57 freeway in 2000, Choi saw a billboard he thought might change his life.

The message read something like, “Got sweaty palms? Call this number.”

Choi, who had tried everything from heavy-duty antiperspirants to prescription medications for anxiety and depression, hoped the doctor on the other end of the line would bring a long sought-after cure.

“It was the worst thing I’ve ever done,” Choi says. “The doctor said I might have phantom sweating. After a week I stopped sweating. Then there was sweat on my shoulder. And then it moved to my torso. What the procedure did was it reallocated the sweat and supercharged it.”

Choi now uses his platform to warn others who are affected by hyperhidrosis about the risks and potential side effects of the procedure.

“More than 18 years later, I still deal with it on a daily basis,” he says. “This has given me the opportunity to share my experience with ETS.”

Thompson Tee also gives him a chance to relish the entrepreneurial drive he inherited from his father — who owned businesses that included a pizzeria, a cleaning service, a chain of frozen yogurt shops and a contract embroidery service provider — with Choi there to absorb it all.

Choi, the father of twin boys, has owned several entities himself. Besides the apparel manufacturing company, he had a smog testing center and a business with his father that he describes as a sort of PayPal for commerce.

“I’m like my dad,” he says. “We both have an entrepreneurial spirit and the drive to do whatever it takes to succeed.”