Alumna’s Love of Tinkering Leads to Career at Mattel

Allison Servey fell in love with figuring out what makes things tick as a teenager on her high school’s robotics team.

Her three years working on Rose Float, including a year as design chair, gave her a passion for being a part of managing a project from start to finish.

So, when she was selected for an internship at the El Segundo-based multinational toy company Mattel and was later hired as a project manager, Servey (’17, mechanical engineering) was thrilled at the chance to combine her talent for seeing a plan through to fruition with her love of tinkering.

“The artists do the toy design, and then we take their sketch or idea and turn it into something that is both manufacturable and feasible within our budget,” she said. “The best part of the job is getting to see the product and test it out.”

The San Luis Obispo native was shaped by experiences early in life that helped her decide what she wanted to do as a career.

Growing up, she wanted to be an artist. She also developed a love of working with her hands early on, often helping her dad make repairs around the house.

“I was always pretty handy,” she said. “I was my dad’s right-hand man.”

For three years in high school, she did mechanical design for the robotics team, which sparked her interest in engineering.

“It was the jumping off point for me to know what I wanted to do for a living,” Servey said. “The team wasn’t highly ranked, but we did well considering we didn’t outsource any of our stuff. We did everything ourselves.”

That resourcefulness would pay off once again when she got to Cal Poly Pomona.

But first she had to get used to her new environment.

“It’s a beautiful campus, but when I first started attending the school, it took some adjusting,” she said. “It was very quiet.”

Students she met encouraged her to get involved in activities. 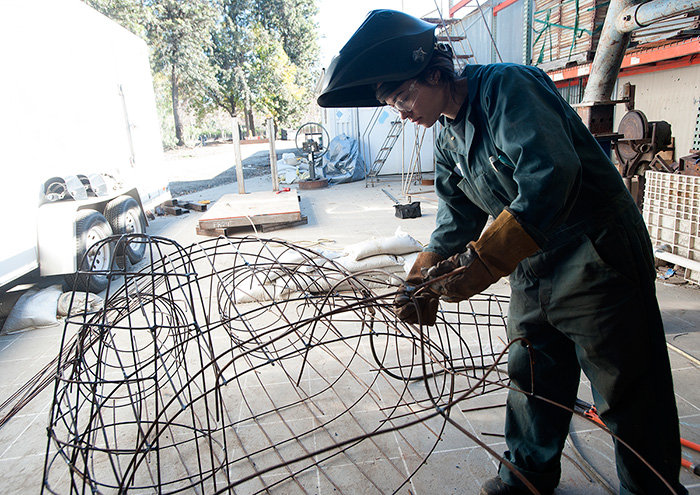 It took her a couple of years, but Servey found her niche as a volunteer for Rose Float. She served as design chair on the 2017 “A New Leaf” float during her senior year.

“I loved Rose Float because it was creative, but it also let me use my engineering background,” she said.

That experience gave her the project management skills she would take with her to Mattel, as she was responsible for directing team decisions on design, the budget for the part of the project she oversaw, as well as managing a team of 10 volunteers.

The most rewarding aspect of working on the float was seeing it get built from start to finish, she said.

“The chassis was the only thing already built, but otherwise, we built everything,” she added. “One of the most important things we got out of the whole experience is we did all of our own work—all of our own welding, all of our own sculpting. Then we go to the parade and go up against professional companies.  The most impressive thing to see is the commitment and the learning curve, what we’re able to do with so little.”

“She was the kind of student who really pushed the envelope,” McDowell said. “One of the things she did was to take a look at our processes and also talk to professional float designers about how they do things.”

Servey also was encouraging to the other Rose Float volunteers and committee members, always providing support, she added.

While taking a full load of classes and working on Rose Float, Servey also had a job on campus in the Information Technology Department. She worked with Adeline Yoshioka, IT administrator for the Division of Student Affairs, who formed a tight bond with Servey.

“It was a joy having Allison and being able to oversee her,” Yoshioka said. “She was warm and friendly, and we became family.”

One of Servey’s tasks was to provide IT support in any capacity needed to Student Affairs, and Servey excelled, she said.

“Allison was an exceptional student assistant,” she said. “She was self-motivated and inventive. Within her time here, she was able to streamline our business processes with little direction, which resulted in better resource allocation.”

In her senior year, Servey stopped by the campus career fair and spoke to the head of human resources for internship recruitment at Mattel. She sent her resume off and was selected for an internship in product development the summer after graduation. That internship turned into a full-time gig. Servey was excited to start.

“I was looking forward to working at Mattel,” she said. “It’s a very team-oriented environment.”

Projects she has worked on include a line for the new “Jurassic World: Fallen Kingdom” movie coming out this year and mini “Teen Titans Go!” figures from a revamped version of the “Teen Titans” television show she watched growing up.

Servey felt prepared once she began working for the company because of the experiences she had in college and encourages students to get involved on campus.

“My experience with Rose Float was hands down the most rewarding experience I had,” she said. “I had great classes, but that is only part of what you need to succeed in the working world. Working effectively with other people and the experience that you get by actually building a project, you learn more that way than you do learning about the theory. You learn more practical things.”

Alumna’s Love of Tinkering Leads to Career at Mattel