Out of the
Driver's
Seat

At first glance, it may look like engineering students are playing an elaborate video game. But in reality, they’re learning to build the next generation of technologies that will soon become a major part of our everyday lives.

Over the summer, students modified an electric go-kart that zips around campus but is remotely controlled from a computer. That’s the easy part, and it’s only the beginning.

This academic year, students plan to operate the go-kart from a high-tech simulator in the College of Engineering’s Building 9. Housed in a faculty office, the simulator mirrors a car interior and was originally designed to help professional race car drivers practice their skills.

There’s a steering wheel, pedals and other controls, and the simulator provides feedback through a series of motors that tilt the driver’s seat, allowing the user to “feel” the road. A set of accelerometers, sensors and 360-degree on-board cameras fitted to the go-kart provide the remote human user with an augmented reality experience in which the driver can actually see and feel the bumps, curves and inclines of the road.

Through the pilotless/autonomous vehicle project, a growing group of engineering students are honing their skills in the developing field of remote and automated machines.

“We want to train, and educate our students, to develop and work on the technologies that are coming up, so they can be ready for current future jobs. This is a platform for us to test.”

The world is becoming increasingly automated, and Behnam Bahr, professor in the mechanical engineering department, says that he wants Cal Poly Pomona engineering students to be prepared.

“We want to train, and educate our students, to develop and work on the technologies that are coming up, so they can be ready for current future jobs,” he says. “This is a platform for us to test.” 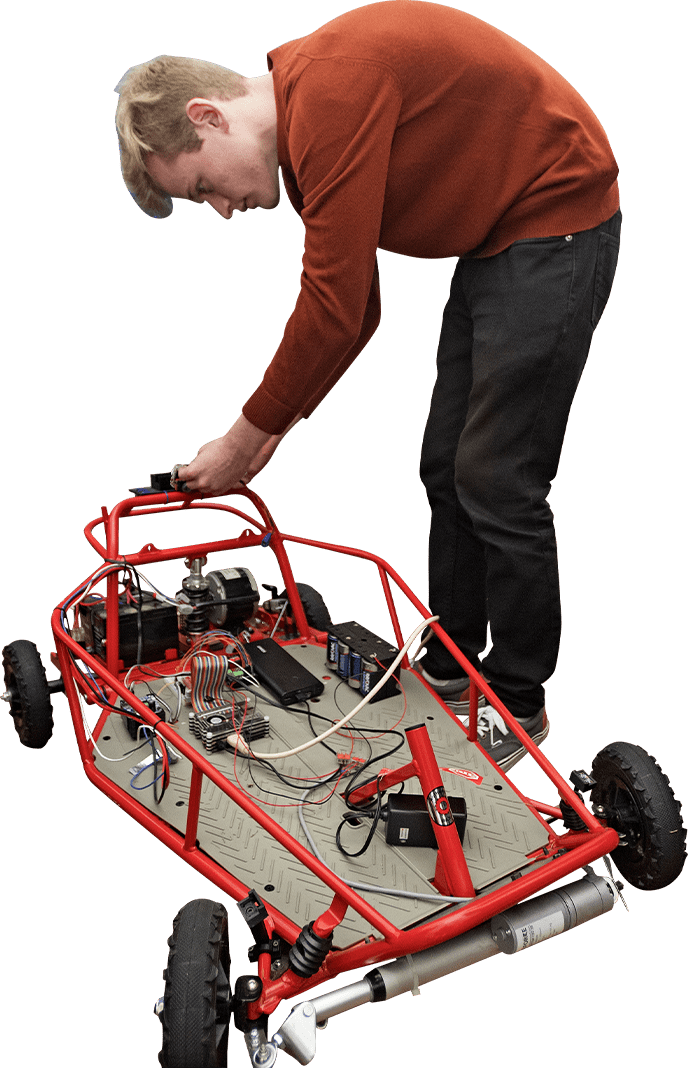 Professor Bahr is coordinating the students’ efforts, along with
other faculty including Tamer Omar, an assistant professor of
electrical and computer engineering. Ultimately, the goal is to operate
the system over a cellular data network, allowing it to roam
virtually anywhere with wireless connections.

The ideas and technologies at play are not limited to
road vehicles, Bahr says. The remote and autonomous systems
have wide-ranging applications ranging from submarines to
industrial machinery, limited only by imagination.

Military drone pilots already use similar technology to control
unmanned aircraft on the other side of the globe. Self-driving cars
and delivery drones are being developed by multiple companies.

But as remote and pilotless technology develops further,
Bahr says it will become increasingly ubiquitous in industry,
as well as in everyday life.

Neal Jacquet, a senior studying mechanical engineering,
was among a handful of students who eagerly volunteered
their Saturdays over the summer to work on the project.

“Summer wasn’t long enough. We weren’t satisfied with our progress,”
he says. “I really enjoy designing and building.”

Bahr, who himself donated the lion’s share of his office space to
house the simulator, says it’s been gratifying to see that students
are so excited about learning.

“They want to do it,” he says. “They are teaching each other as
I can hear them from my office.”

The autonomous vehicle project is a collaboration among the
various engineering disciplines, including mechanical,
electrical and computer, electromechanical engineering technology
and computer science. It’s an example of the multidisciplinary approach
to engineering known as “mechatronics,” according to Bahr.

The project pushes students to step outside their comfort zones and integrate
new ideas into their work, Jacquet says. Mechanical engineering students
are exposed to more elements of the electrical side of engineering, and vice versa.

While Bahr is coordinating the mechanical engineering side of the project, Professor Tamer Omar is guiding students with the integration of the system into the wireless 4G — and soon 5G — network. “An internet of vehicles,” he says, playing off of the “Internet of Things” concept.

“It’s a huge project. There’s a lot of opportunities that can benefit our students a lot,” Omar says. “Each of these systems in itself is a complicated system.”

Like the go-kart itself, the autonomous vehicle project is meant to go in whatever direction the students imagine.

In addition, students must be mindful of cyber security issues, he says. They will practice “attacks” on the system, while fellow students work on developing defenses.

It would be undesirable and dangerous for an electronic intruder to be able to take unauthorized control of an autonomous vehicle, as an example. Measures must be taken to ensure the communications and control systems are secure from outside interference, Omar explains.

Daniel Luevano, a mechanical engineering senior, says the project has sparked his interest in robotics.

“We just really love the project and it’s super interesting,” he says. “It’s fun and it makes you more marketable.”

Working on the project has forced Luevano to step outside his comfort zone, he says.

Luevano says he’s eager to see the system fully operational before he graduates. After that, he hopes to continue in the field of robotics.

Bahr sees this project becoming a signature polytechnic experience at Cal Poly Pomona. Beyond the short-term goal of jump-starting the vehicle and simulator, the project can be upgraded almost indefinitely with a dedicated team of undergraduate and graduate students.

Controls can be improved. New forms of feedback can be added. Multiple vehicles could be taught to interact with one another. Artificial intelligence, automated decision-making and more could be on the horizon for the project.

Experimentation is encouraged, Bahr says. Like the go-kart itself, the autonomous vehicle project is meant to go in whatever direction the students imagine.

“They can come here and test their ideas on this system,” he says.

As the students watch their inventions take shape, “They start to get excited,” Omar says.

Although challenging, Omar says this type of project provides invaluable experience for the students.

“This is exactly learn by doing. One of our main objectives is to prepare them for the job market,” he says. “They can prove how smart they are, and how smart I believe they are.”

The Simulator
Housed in a faculty office in Building 9, a driving simulator mirrors a car interior and was originally designed to train professional race car drivers.
Cyber Security
Data from the simulator is sent to a server to an IP address to a small computer onboard the go-kart. Mindful of cyber security issues, students develop defenses against hackers who may try to take control of the car.
Wireless Cellular Network
The goal is to operate the system over a cellular data network (4G and 5G) so the car can roam anywhere there is a wireless connection.

Out of the Driver’s Seat