Back in the early 2000s, Cal Poly Pomona students would wait at the Bronco Shuttle stop, not knowing where it was or when it would arrive.

With GPS technology emerging into the consumer electronics market, Jia tapped it to develop an online tracker to map every shuttle on campus and estimate arrival times. 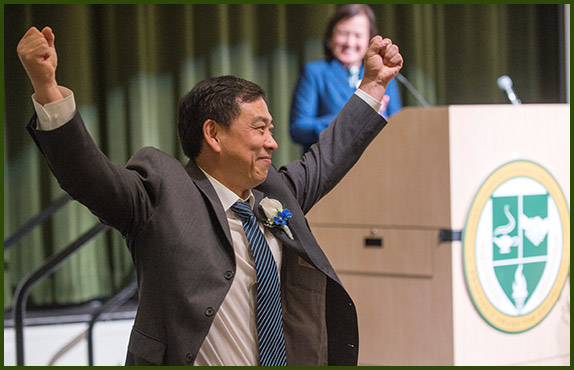 The civil engineering professor also used his transportation expertise and big data to help develop an early earthquake warning system for Southern California Edison. The class project with Cal Poly Pomona students to create the system’s software earned praise from former U.S. Sen. Barbara Boxer. Anytime that Jia, who has been chair of the civil engineering department since 2014, gets an opportunity to take his professional expertise and merge it with his passion for tapping big data to find solutions, he jumps at the chance — often taking his students along for the ride.

Jia’s career also has involved striking a balance between the passion projects and his focus on ensuring students are academically successful and workforce ready.

Jia has been honored with four prestigious awards for his work. He has received $1.5 million to complete 42 externally-funded projects.

For the past decade, he has consulted on projects for the city and county of Los Angeles and advised L.A. Metro on its Regional Integration of Intelligent Transportation Systems, a big data network that exchanges information in real time between agencies that oversee freeway, traffic, transit and emergency services.

“I had this dream.
The dream was to make sure our students get real-world experience for their senior projects.”

Jia’s teaching and professional career have been a lesson in forging relationships.

“I had this dream,” he says. “The dream was to make sure our students get real-world experience for their senior projects.”

More than a dozen others are at various stages in the Caltrans’ review and approval process.

Besides honing their engineering chops, the students gain essential skills such as communication, teamwork and public speaking, Jia says.

“Dr. Jia provides real world exposure,” he says. “Theoretical is good and important, but the real-world application and getting students ready for real-world experience is key.”

“Cal Poly Pomona students have a leg up on a lot of other students,” he says. “I see them as well prepared, ambitious, articulate. They have communication skills that are lacking in previous generations, including mine. There are several graduates who are already in management level positions.” 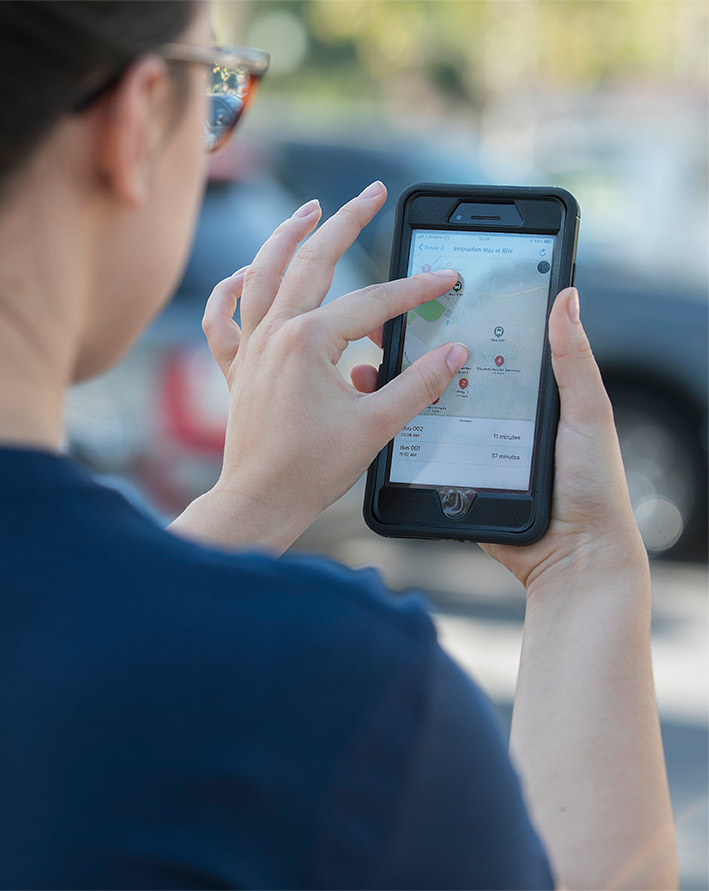 From 2005 to 2008, Jia applied for $500,000 in grant funding to equip Cal Poly Pomona’s campus shuttles with GPS monitors. This was at a time when GPS wasn’t as widespread as it is today, Jia says.

“We were pioneering with that,” he says. “I am very proud of that project.”

Through the grant, the university placed a digital sign at four route stops on campus that displayed how many minutes until the next shuttle’s arrival.

Jia’s work was the precursor to the current system, which allows students to track shuttle arrival times through a website and the CPP mobile app.

“His idea to implement the program for the campus was extraordinary,” says Glenn Shenker, director of Parking & Transportation Services at the time. “We are a large campus and we need a shuttle system, but to implement a program like this where you can track the buses now on a cell phone was a testament to his vision.”

In 2006, Jia headed a team of researchers on campus that developed a GIS-based earthquake warning system dubbed QuakeView for Southern California Edison.

The utility giant was developing an emergency preparedness system that tapped into a network of satellites to monitor seismic activity and warn of earthquake activities. Jia’s project took the data Edison collected and estimated which zones would be affected, enabling notification a few seconds before an earthquake strikes. This system has laid the foundation for the county’s current earthquake early warning systems.

Always looking a few steps ahead, Jia is developing a new system that will link traffic sensors with earthquake data and send it directly to cars so that drivers can hit the brakes.

In Temecula, freeways and expanded development have threatened mountain lions, especially when they cross the 15 Freeway.

Jia is working with Professor Wen Cheng and Associate Professor Lourdes Abellera, both in the civil engineering department, as well as a team of students, on a wildlife crossing solution.

The team presented options for crossing to Caltrans and the Department of Fish and Wildlife in May, 2019. These options are being reviewed by the state agencies.

UC Davis was doing ecological research and collecting data on mountain lions. The university reached out to Caltrans, who recommend Davis researchers team up with Cal Poly Pomona to help find a solution, Cheng said. Jia sent out an email requesting volunteers for the project, and Cheng, who has collaborated with Jia on ranking traffic projects for Caltrans funding and big data research on active transportation – walking and biking – stepped up.

“I am always asking if there is any way to apply my engineering to new fields,” Cheng says.

Cheng adds that he has an ease in collaborating with Jia because they have teamed up on so many projects and share interests.

“For research projects to have a successful completion, it requires all of the people in the group to work together at a high frequency and enjoy working together,” Cheng says. “He’s very energetic. I really enjoy working with him, his passion and his experience.”

Xudong Jia Has Made an Imprint on
Student Success, Pioneering Projects 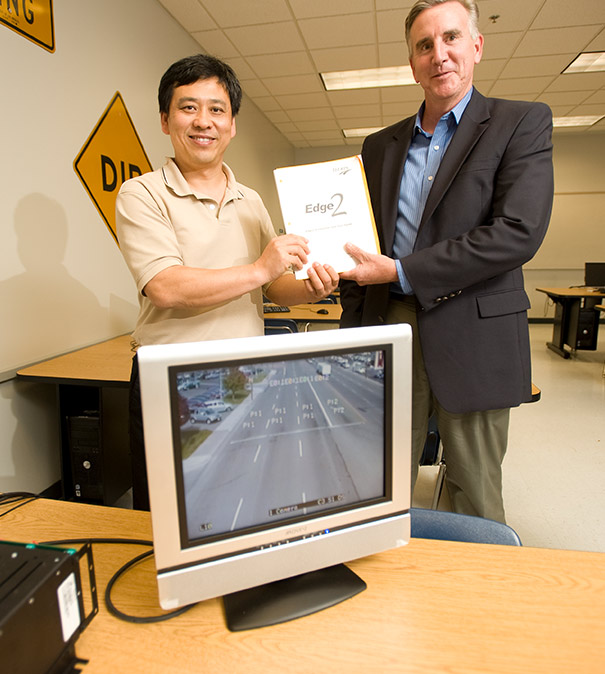 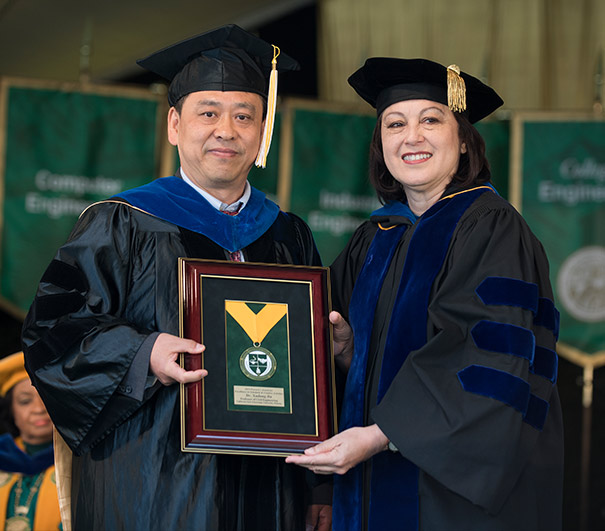 Xudong Jia calls it his DNA.

The projects that have shaped his professional career, the mentorship he provides to faculty colleagues and the impact on the students he has taught all make up his imprint.

The importance of leaving a mark is something he tries to impress on others.

“I always ask professors ‘What’s your DNA?’” says Jia, chair of the civil engineering department. “What is your contribution to the department?”

In his more than two decades at Cal Poly Pomona, Jia’s contributions include developing an earthquake pre-warning system for Southern California Edison to pioneering technology to create a GPS system for the Bronco Shuttle.

He forged a long-standing relationship with Caltrans that has enabled engineering students to work on roadway and highway projects, collaborate with faculty and see their ideas built up.

His body of work — in research and academia — earned him the 2019 Provost’s Award for Scholarly and Creative Activities.

One of the things he is most proud since becoming chair in 2014 is his emphasis on research, promoting the teacher-scholar model, Jia says.

“I empower our faculty,” he says. “I changed the culture of our department from teaching only to teaching first then also research.”

Jia first knew he was interested in teaching as a young graduate school student. But years before that revelation, he would need to receive a nudge towards engineering as a high school student preparing for college. The China native excelled in school growing up, even skipping a couple of grades and graduating high school at 16.

He wanted to study computer science, but at the time, college students were not able to choose their major. Transportation engineering and management, with a railroad emphasis, was picked for him. He earned his bachelor’s degree from Beijing Jiaotong University in 1983 and his master’s in 1986.

“I knew pretty early on in my career that teaching is what I wanted to do,” he says.

He applied to teach at Cal Poly Pomona in 1996, but that proved to be a study in patience.

“Two years later, I got a phone call from the chair asking if I was still interested in the position,” Jia says, who started teaching at the university in 1998.

Civil Engineering Professor Wen Cheng has teamed up with Jia on several projects, including a pathway for wildlife crossing under the freeway to help save mountain lions in the Temecula area. They also do an annual ranking of projects together for Caltrans to help the agency determine how to allocate its funds and have conducted big data research on walking and cycling trends.

Cheng, who has been at Cal Poly Pomona since 2009, says their shared interests make it easy to work together, and he feels supported. Working with Jia has helped Wen find his own DNA.

“He’s very energetic,” Cheng says. “He will give me some ideas from an administrative perspective — how to deal with funding agencies, research offices or foundations. I really enjoy working with him. I benefit a lot from working with him.”

Professor Xudong Jia, chair of the civil engineering department,
forged a relationship with Caltrans in 2005 to enable students to get real-world experience for their senior projects. Since then, students in the program have designed several freeway interchanges and road projects and have dozens more at various stages in the Caltrans review and approval process.

Out of the Driver's Seat
Cyber Security
Foal Watch