After high fives all around, Violet Palmer settles into a chair in the Cal Poly Pomona women’s basketball locker room on an August afternoon, all eyes intently on her.

She became the first woman to referee an NBA game in 1997, the year she and Dee Kantner broke the gender barrier. Now, three years after refereeing her 919th NBA game and retiring because of knee injuries, Palmer makes a preseason visit to Coach Danelle Bishop’s players each year.

“I can honestly say, ‘I’ve been in this room as a player,’” says Palmer, looking at walls that still display images of her coach, Darlene May, along with shots of Cal Poly Pomona’s five national championship teams. Palmer played on two of them, in 1985 and ’86. She returned to complete a degree in 1988 preparing her for a career in sports administration — one she laughs she is finally putting to use as coordinator of women’s basketball officiating for the Pac-12, West Coast and Western Athletic conferences.

“The one thing I know is that I do not take for granted my opportunities,” she tells the players during a 45-minute visit. “I have to say to each one of you sitting right here, you have no idea how many young girls would love to be in this room. Being here, when you look around this room, for me, I get chill bumps because of the tradition, the things that I learned from being a student-athlete at Cal Poly Pomona that have helped me in my life.”

Opportunities are exactly what Palmer (’88, recreation administration) is seeking to provide with her most recent gift to the women’s basketball program of $25,000 over five years.

“It enhances almost every aspect, I personally feel, of our program,” says Bishop, who is in her 10th season as coach.

“One year, maybe we’re traveling somewhere and our budget may not be able to accommodate us for every trip, or maybe one year we need new uniforms,” Bishop says. “Maybe one year I have a transfer who decided to come in late and I don’t have any scholarship money to give them and I need some additional scholarship funds.”

Perhaps more valuable than Palmer’s monetary gift is the time that she spends with players before the season. 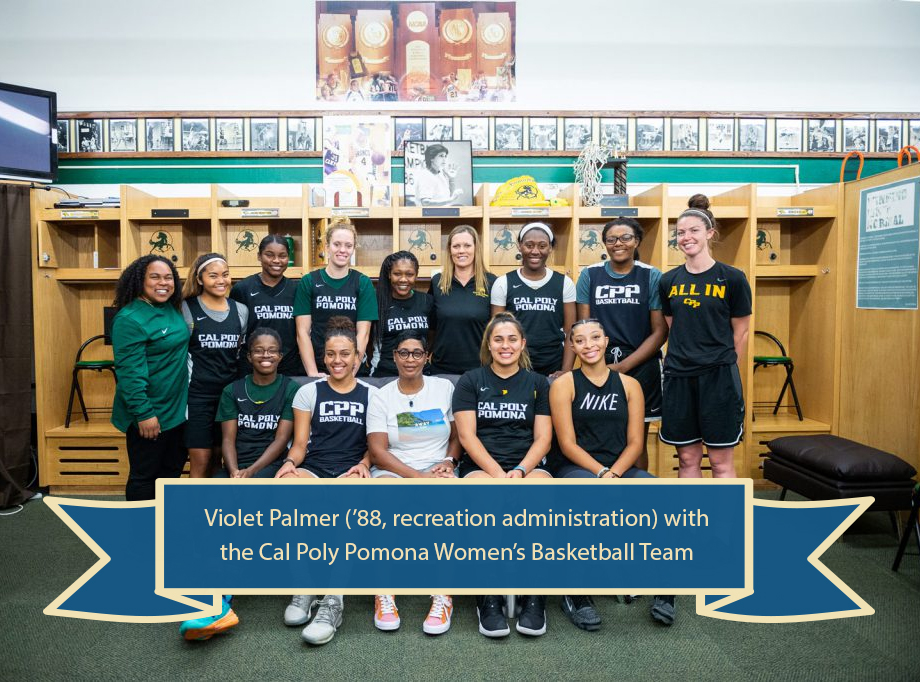 “This is my heart,” says Palmer, winner of the Cal Poly Pomona Alumni Association’s 2016 Distinguished Alumni Award. “I always come back because, again, this tradition helped me make it.”

Bishop calls Palmer “just super-genuine and really laid-back.” But her star power is undeniable, and the women’s team responds to it.

“I actually watched a game when she reffed LeBron [James], and he’s my favorite player,” says Mylah Andrada, a senior guard. “It was nice watching her temperament and seeing her interacting with people of that caliber and all that talent.”

That authoritative yet personable demeanor carried Palmer far. Her appreciation for hard work and following the rules started with her parents and was reinforced by May, who led the Broncos to three national titles in 20 seasons before terminal breast cancer forced her to retire in 1994.

“Coach May, she ran a tight ship,” Palmer says. “For me, getting into officiating was about rules and regulations and integrity of the game. And that’s why I say for me it was so natural.”

When Palmer started calling high school games after college, May soon heard about it.

“One day I came up and she called me into the office and she said, ‘VP, a little tweety bird told me that you’re officiating.’ And I said, ‘Yeah, I’m trying to get my feet wet.’ She said, ‘No, I heard that your feet are pretty wet. You’re doing very, very well.’

“That’s all you need from your mentor,” Palmer says, smiling at the memory. “Just that rubber stamp.”

Palmer and May even officiated a game together once, a rivalry game between Pomona College and Claremont McKenna that went to triple overtime. 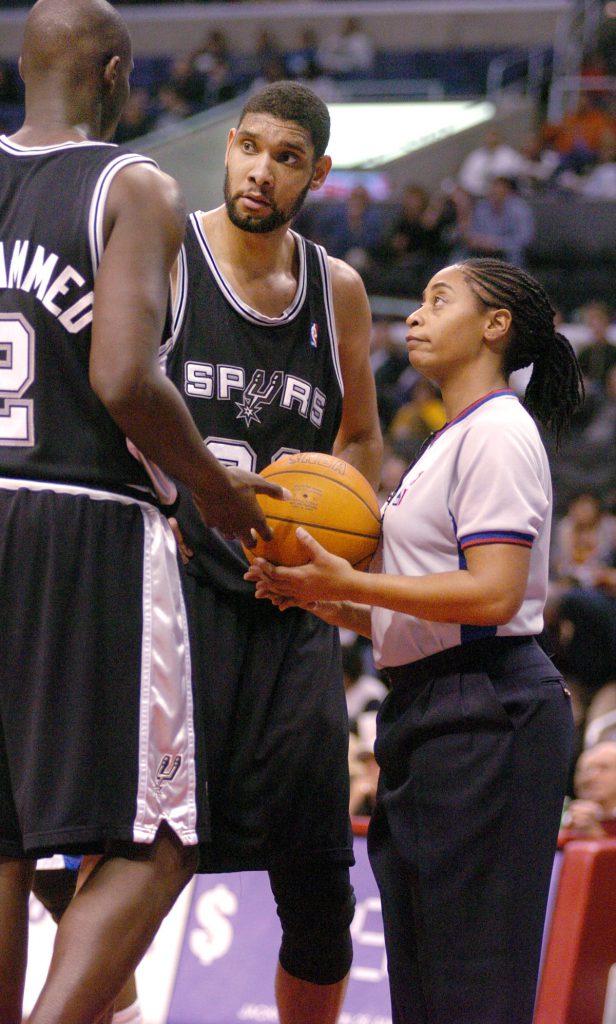 “We went to the locker room after the game and I said, ‘Coach, how about this will be my first and my last game ever working with you?’ We were exhausted and it was so much fun.”

Palmer’s break came when NBA officials invited her to take part in the league’s referee development program. Her command, her irreproachable demeanor, her dedication to the rules and mechanics, the film study and staying in shape carried her to the pinnacle of her profession, calling NBA playoff games and an All-Star Game.

Opportunities are available to today’s female athletes that weren’t available to Palmer. The WNBA, for one, which formed in 1996.

But Palmer nudges the players, going into recruiting mode: There is refereeing too, she tells them, and she’s hiring. She supervises a pool of 150 to 175 college referees every season, and the money is good. The players light up, enticed.

It’s hard work, she tells them, and it takes a commitment to developing officiating skill and maintaining fitness. But she says, even LeBron James, Kobe Bryant, Michael Jordan — all of them — worked hard. It wasn’t just the talent. That, Palmer says, is her message to the players.

“You know what, this is a great opportunity,” she says. “And you have to take advantage of it, because one thing we’ve all learned is that you can never get time back. Because once it’s gone, it’s gone.”