Scholarships allowed them to attend college, so they decided to pay it forward

It would be completely understandable if Marwa Mhtar and Su Yeon Kim (’17, biology) someday boasted about earning their bachelor’s degrees from The School of Hard Knocks.

Marwa’s parents emigrated from Syria, years later when a civil war broke out in Damascus they took in about a dozen family members. She wasn’t the best student either, nearly flunking community college.

“I didn’t really have anyone guiding me,” said Mhtar, who plans to graduate with a degree in anthropology in 2018. “I had this ‘impostor syndrome,’ and felt like I didn’t belong in these big institutions.”

Kim, who grew up in Koreatown in Los Angeles, has been working her entire life. During her first year at Cal Poly Pomona, she worked at Ronald Reagan UCLA Medical Center as a pharmacy messenger, ferrying heavy carts all over the eight-floor hospital. She rode a maze of buses and trains between Los Angeles and Pomona, with commutes sometimes stretching three hours.

“I helped support my family with that job,” Kim says. “They were going through a difficult financial situation at the time.”

Despite the challenges, both women have shone at Cal Poly Pomona. They earned spots in the McNair Scholars Program, which provides grad school-bound students with a research internship and pairs them with faculty mentors.

All of us kind of bonded on the fact that we had similar financial obstacles.”

Kim and Mhtar, among 23 McNair Scholars for the 2015-16 school year, described the program, especially a six-week “research boot camp,” as a pivotal part of their Cal Poly Pomona experience – it’s also what motivated them to return the favor.

“They paid for our housing and they paid for our meals, so we really didn’t have to worry about the financial burden during that month and a half. It was so refreshing,” Mhtar says. “I never before got that college dorm experience” – a welcome change from her crowded Anaheim home.

“All of us kind of bonded on the fact that we had similar financial obstacles,” Kim adds.

The two young women took struggles that could have left them deflated, marinating in self-pity and used them as inspiration to smooth the path for their future Broncos.

The fund was even chosen to be the official gift from Cal Poly Pomona’s Class of 2017. As of Oct. 1, donors have contributed $22,361 and have made it the largest senior class gift in the university’s history.

“We’re thankful to leave something behind to show our gratitude,” says Mhtar.

“There are so many ways to feel discouraged when you’re starting out in college,” says Kim, who earned her bachelor’s degree in biology this past June and plans to attend medical school.

Scholarships, she said, show students that somebody believes in them. For her, the additional funds allowed her to “focus more time on projects I wanted to work on, rather than making sure I had food on the table.”

Every year, Cal Poly Pomona’s Educational Opportunity Program will select four students as Emerging Scholars. Each will receive a $750 stipend to help cover college fees or living expenses. To be eligible, recipients must be low-income students, maintain a 2.5 GPA, and be the first in their families to attend college.

From a pure numbers standpoint, the Emerging Scholars stipend may not make a large dent in the annual cost of tuition ($5,742 for 2017-18). But the pair hope they’ll give each student a morale boost. 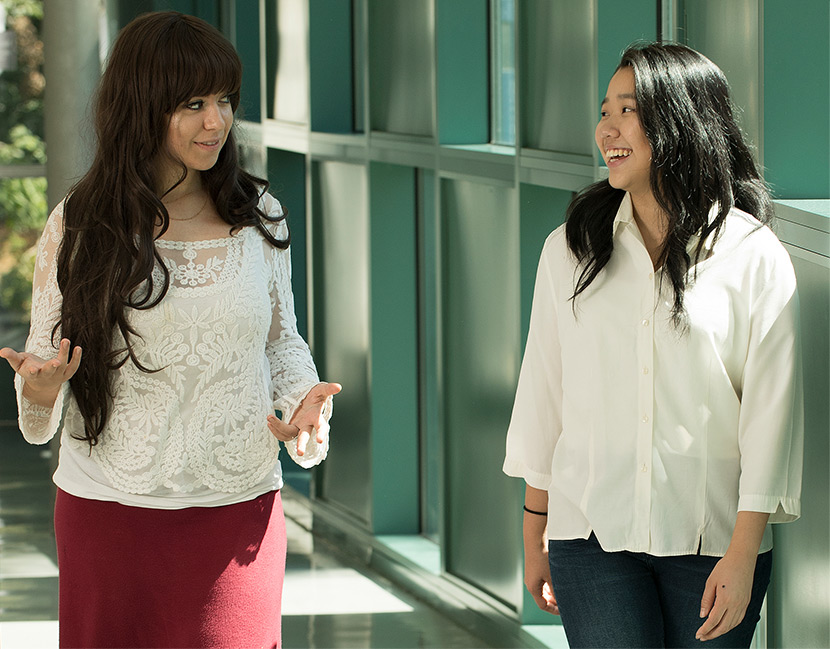 We’re thankful to leave something behind to show our gratitude”

“The money amount is not huge, although it would be very helpful to many students as they face unexpected costs of college — books, food, miscellaneous school fees,” Dong explains.

“But more than just the money, Marwa and Su created this scholarship to tell students that someone believes in their potential.”

Scholarships allowed them to attend college, so they decided to pay it forward