The Rose Float Lab and Design Complex, scheduled to break ground in 2018, will include a new 5,700 square foot building that includes an electronics shop, hydraulic shop and a large bay for float construction. The 1/3-acre complex also includes a large outdoor courtyard and picnic area for design work, float building, meetings and student gatherings. In addition, the complex will include about 5,000 square feet of storage space.

Year after year, our Rose Float students, alumni and volunteers literally make dreams come to life. I am overjoyed that we will have a new lab specially designed to support our award-winning program, enhancing student learning, collaboration and innovation.”

The current Rose Float work area is an open-air warehouse structure that was built more than 30 years ago by students. The program needs new equipment and tools, better security for the equipment and shelter from the elements.

“From August through December, the Rose Float lab is a second home to dozens of students and volunteers,” said Janetta McDowell, Rose Float director and an alumna who volunteered as a student.

We are a student-designed and student-built program, which offers incredible learning opportunities in all disciplines. The new lab will give us the opportunity to be more innovative and imaginative.”

The $3.7 million project is funded primarily through private donations, including a $1 million lead gift from alumnus Butch Lindley and his wife Vivien. They have requested the lab be named in honor of alumni Don Miller and Ron Simons.

Miller, who died in 2004, was a student at Cal Poly Pomona when he pitched the idea of entering the Rose Parade with less than 90 days to go. On Jan. 1, 1949, the Cal Poly Universities’ made its Rose Parade debut with “A Rocking Horse.”

Ron Simons, nicknamed “Mr. Cal Poly Pomona,” has been a leading supporter of the Rose Float program for nearly all of his life, from his time as a student in the 1960s to being an administrator in the Division of University Advancement. On the campus’ 1962 float, “Man on the Moon,” he was the astronaut on the moon, seven years before Neil Armstrong stepped on the moon.

With a goal of breaking ground in 2018, the university has launched a Rose Float Lab Fund Raising Campaign to raise the remaining $800,000.

The 2018 float, “Dreams Take Flight” will be the 70th entry from Cal Poly Pomona and Cal Poly San Luis Obispo in the Rose Parade, whose theme this year is “Making a Difference.” The 27-foot float will feature three young animals flying airplanes among sparkling stars and clouds.

The Cal Poly Universities’ float is the only student-designed and built entry in the Rose Parade. A joint effort by students at Cal Poly Pomona and Cal Poly San Luis Obispo since 1949, the team has won 57 awards including the 2017 Founder’s Trophy for most beautiful float built and decorated by volunteers from a community or organization. 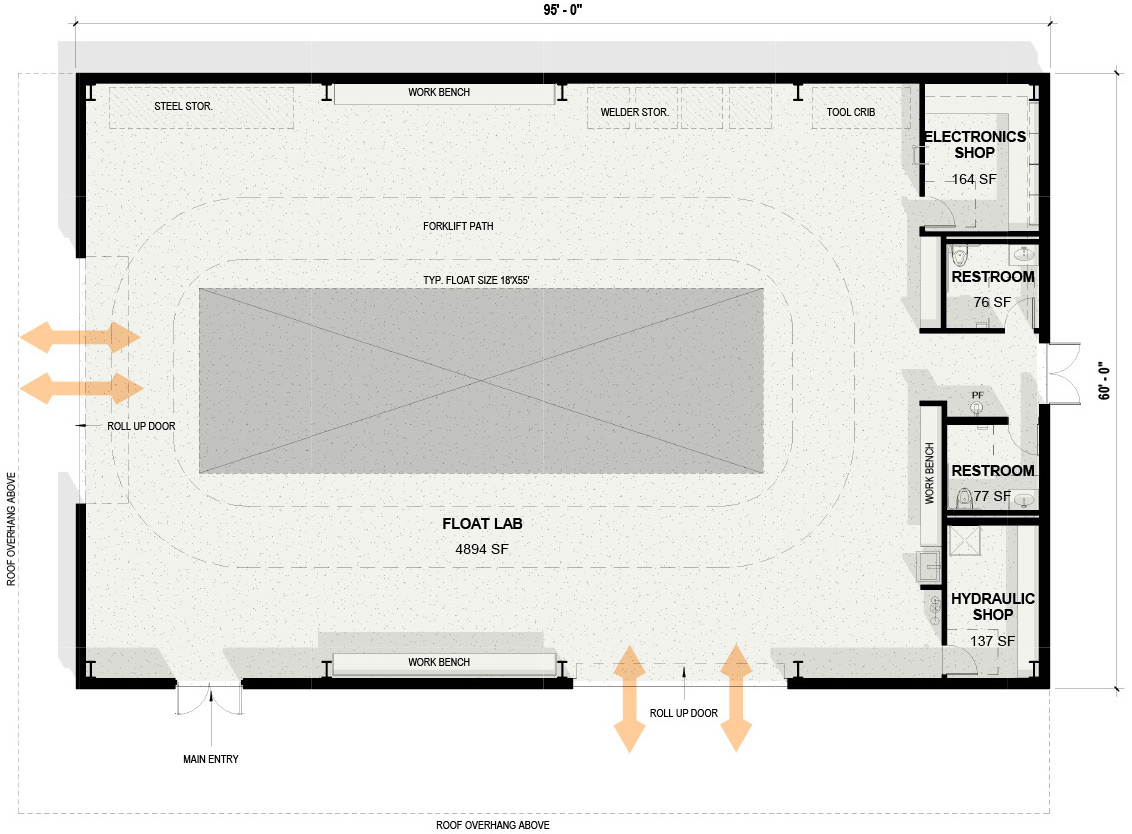 The floorplan of the new Rose Float Lab that is scheduled to break ground in 2018.