About 25 students pack into a small room on the edge of the Cal Poly Pomona campus at 10 a.m. on a Saturday in late August. The cramped space is adorned with mismatching blue and green murals, purple cupboards, and floor space that’s draped with tools and machinery ranging from hammers and nails to blowtorches.

While most students are still enjoying their summer vacation and classes don’t start for another month, this is already the fifth weekend meeting since July for the Cal Poly Pomona Rose Float team.

Such is the sacrifice for the student volunteers who come together to build the Cal Poly Universities’ float for the Rose Parade, viewed by millions of people worldwide. Going up against floats with million-dollar budgets and being only one of six volunteer-built floats in the parade, the challenge to create a beautiful and innovative float has become a rite of passage for ambitious and hardworking CPP students from all backgrounds.

This year’s float will be Cal Poly Pomona’s 70th entry in the Rose Parade. The 27-foot “Dreams Take Flight” will feature a red panda, sea otter and koala soaring into the sky in homemade planes.

For first-time Rose Float volunteer Elijah Koerner, a 26-year-old junior majoring in mechanical engineering, it’s an opportunity to apply the skills he is learning in his classes to a real-world project.

It’s what I want to do as an engineer and what I’m learning to do as a student at Cal Poly Pomona.”

“Rose Float is the embodiment and ability to make my dreams for the future come true now” he says.

Koerner transferred to CPP in fall 2015 because of the College of Engineering’s reputation for allowing students to “get their hands dirty.”

“When I was working on my core classes at El Camino College, it just dawned on me that most of my free time was spent fixing things like cars, laptops, electronics — mechanical engineering was a natural fit,” Koerner says.

Back at the Rose Float lab, a fluorescent overhead light brightens the attentive morning faces of volunteers as Alex Brod, also a mechanical engineering student and the construction chair, dishes out general instructions to the group. Koerner listens intently.

Brod takes seven volunteers outside in front of the chassis of the 2018 float, a large metal frame that will serve as the base. The four-year Rose Float veteran rattles off additional assignments while peering into a small black journal filled with notes. 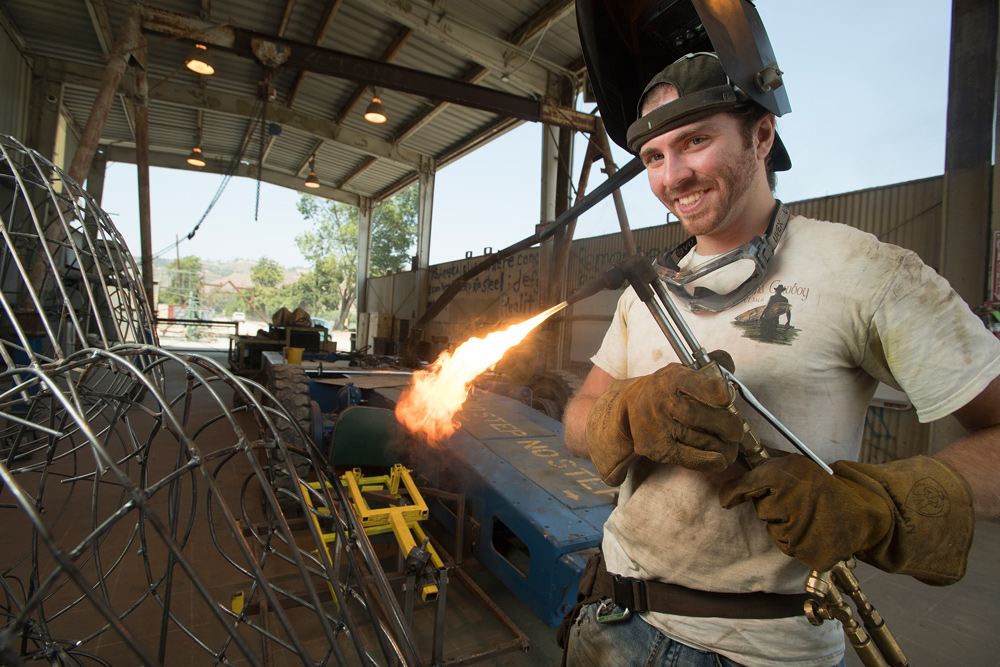 After Brod’s instructions to the group, Koerner wastes no time in pulling a colleague aside to work out geometric equations on a tiny notepad before spending the next two hours working on a “mech” (mechanical part responsible for movement) that will enable the pitch and roll of the koala cub’s airplane, which will be suspended 17 feet in the air.

The Cal Poly Universities’ rose floats have won 57 trophies since 1949, and students were the first to use computer-controlled animation in 1978.

Crucial in the success of the program is immaculate year-round planning.

“We’ll begin the planning process for the 2019 float almost immediately after the 2018 float strolls down Colorado Avenue,” says Janetta McDowell (’97, liberal studies), director of the Cal Poly Pomona Rose Float program. “Rose Float involves volunteers, alums of the program, our corporate donors, and countless individuals who all are instrumental in this special process.”

The 50-person Pomona team has been working on the planning aspects of the float since February in conjunction with Cal Poly San Luis Obispo. The early stages consisted of several months of design meetings in which float specs are agreed to and planned. Construction of wireframe aspects of the float began in early July, and work on the mechanical portions of the float continue through December.

In late December, during “decoration week,” the group will join other volunteers in placing thousands of flowers and natural elements on “Dreams Take Flight.” One week after that, on Jan. 1, 2018, the float will be on the world stage at the Rose Parade.

According to Koerner, the secret to the success of the program is the collaborative culture.

When Koerner joined Rose Float earlier this year, he dived right in and helped design the early concepts of the “mechs” and assisted in proposing the mechs designs at meetings between the Pomona and San Luis Obispo campuses.

The passing down of institutional knowledge from one group of students to the next is critical for a 70-year-old program that loses about 10 student committee members (about one-fifth of the group) a year to graduation annually and expects to maintain its reputation for excellence.

“If I don’t know what I’m doing I can ask my chair,” Koerner says. “If they don’t know the answer, we can talk to faculty or even staff on campus. If we need even more info, the companies that donate material, we can ask them for advice.”

For a program that has 50 volunteers, 20 that are new, and collaborate for approximately 750 hours a year, including weekends and holidays, cohesiveness is key” McDowell says.

Koerner is excited to see his hard work come to fruition on New Year’s Day 2018.

“I can’t wait to see the entire finished project and say I was a part of all of that. These are all my friends, my Rose Float family. That’s a great fulfilling feeling,” Koerner says.